DELIVERED FROM THE FEAR OF HEIGHTS

Karl Spencer – Delivered from the fear of heights

Prior to Israel, I had been to Switzerland. Whilst there, I went up an observation tower 30ft high. It didn't look too high although, as soon as I started climbing up, I felt overwhelmed with fear. I tried to climb up the spiral staircase to the viewing platform but struggled to make headway against the fear. Coming down felt even worse as I held tightly to the rail, slowly making my way down about 25ft. After reaching the bottom, the feeling didn't leave straight away and it took quite a while till I felt okay.

Well, planning the trip to Israel and seeing that cable cars could be involved, I remembered a previous experience where I didn't enjoy it at all and was glad to get off. So, although I felt a bit ashamed having to admit this fear of heights I asked Kevin to pray for it before I went to Israel.

At the time I didn't feel a huge relief and thought I would just have to trust by faith, but as I went up the cable car in Israel, I was so relieved that the feeling of dread didn't come and I was actually able to enjoy the whole cable car ride. A complete contrast to some of the other people on the ride who were visibly shaking with fear as I used to! But praise God, I was completely delivered from that fear of heights through your prayer, thank you Kevin. 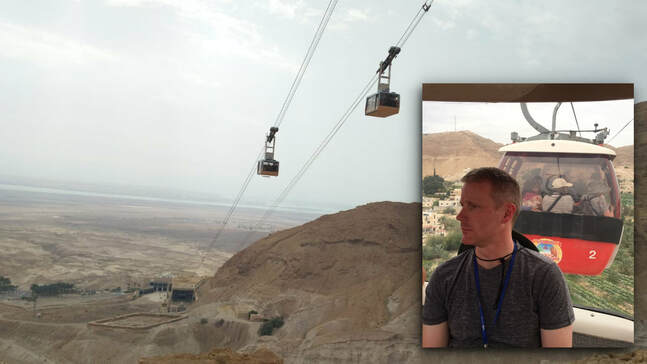 Delivered from a fear of dogs!

Many years ago, while at a home fellowship, someone asked me to pray for their daughter. They told me that she had a fear of dogs and asked me if I wouldn’t mind removing it! Well, at that moment I had never witnessed anyone healed from a phobia, so I was completely stepping out in faith here, so I placed my hand upon the five year old's head and started praying and commanded the spirit of fear to be bound and go in the name of Jesus. When I had finished praying for her, I asked her if she had felt anything or had any pictures while I was praying, to which she testified that, during prayer, she was given a vision of a dog walking towards her and she wasn’t scared! In fact it came right up to her and she began to stroke its head and back without any fear at all! Praise God. In fact, the parents contacted me a week later to complain that their daughter had plagued them all week to buy her a puppy!

See, the bible says (2Tim, 1:7) “For God has not given us a spirit of fear, but of power and of love and of a sound mind”, so a spirit of fearfulness and timidity does not come from God.

Yes a healthy reverential awe of God, a reverence and respect for His power and glory, is beneficial for us, for fear of the Lord brings with it many blessings and benefits. It is the beginning of wisdom and leads to good understanding (Psalm, 111:10). Only fools despise wisdom and discipline (Pro, 1:7). Furthermore, fear of the Lord leads to life, rest, peace, and contentment (Pro, 19:23). It is the fountain and life (Pro, 14:27) and provides a security and a place of safety for us (Pro, 14:26).

So any fear that overcomes us, outside of the fear of not being in God’s will, is a lack of trusting in God and His love for us, because “he who fears has not been made perfect in love” (1Jn, 4:18) As in, he who fears has not allowed themselves to be transformed by the Lord, as all unclean spirits dwell in the unsanctified “un-surrendered” areas of people's lives.

Praise God that, by faith, we have been given the power and authority through Jesus to break curses, bind and cast out spirits that try to stop us from becoming who we are called to be.

Delivered from a Spirit of Trauma

Unfortunately, many physical and emotional injuries give a window of access to trauma and if not dealt with correctly by inner healing through deliverance, many years of torment and agony can be the result. Whilst ministering at CKRM, PJ, the Holy Spirit revealed to us that something terrible had happened to this young man in his childhood, which had caused him much pain and suffering and through Holy Spirit lead prayer we were able to deliver him and take out the stronghold, the very root of entrance, which in this case happened to be a “spirit of trauma”. He had come to several meetings before and received much deliverance from fear, anxiety, witchcraft, night terrors, but this was the root and stronghold, so great to see people get really free, praise God for the sanctification power through the work on the cross, amen.

Delivered from a fear of flying

healed from chest pains after deliverance from fear & anxiety

This Lady was healed from chest pains (supposedly caused by asthma) as she was delivered from a spirit of fear and anxiety during a meeting held at Cornerstone International Church, PJ. And from further prayer God also healed the numbness in her right leg, praise God.

Once I was asked to pray for a lady with an issue of fear. As we prayed for her, I was shown that there was an issue with sexual abuse from her childhood. The Holy Spirit guided me in sharing different testimonies of a similar nature. After about an hour of sharing, all of a sudden she started to cry. The ministry time was so important, because the stories led by the Spirit had opened up her heart and mind to receive the conviction by the Holy Spirit. And as she opened up, I heard the most disturbing story of how her parents had in fact dedicated her to Satan as a baby and had involved her in satanic rituals. The knock-on effect of sexual abuse and fear of the opposite sex had destroyed her relationships and life. Now, lots of people had prayed for this fear problem to go, but I was shown by the Spirit that, in order for her to be delivered, we must first break off the generational curse placed upon her through her parents. And as we asked her to acknowledge and repent of the sins of her parents, then forgive her parents, this tore out the root that was enabling the spirit of fear a foothold. So eventually we cast it out and she was completely healed of her fear of men, praise God.

healed from a spirit of fear