"...keeping mercy for thousands, forgiving iniquity and transgression and sin, by no means clearing the guilty, visiting the iniquity of the fathers upon the children and the children’s children to the third and the fourth generation.”
​Exodus 34:7

The video below was taken from a home meeting in Kuala Lumpur, Malaysia, where the Holy Spirit revealed that the lady had a generational curse of Idolatry.

“I have set before you life and death, blessing and cursing; therefore choose life, that both you and your descendants may live” (Deut.30:19).

When someone chooses to ignore God’s commandments, or openly rebels against God’s laws, believer or not, they will be cursed, because no sin goes unpunished (Job.10:14). And sometimes these curses are passed down their family lines. As the bible says;

“For I, the Lord your God, am a jealous God, visiting the iniquity of the fathers upon the children to the third and fourth generations of those who hate Me, but showing mercy to thousands, to those who love Me and keep My commandments” (Ex.20:5-7).

Not “that I like to see wicked people die? says the Sovereign Lord. Of course not! I want them to turn from their wicked ways and live” (Ez.18:23 NLT). But because of their trespasses they are guilty and in the sins that they have committed, because of them they shall die (Ez.18:24-25).

So, many people today live in ignorance under the effects from sin incurred curses, which can be barrenness, mental breakdowns, hereditary diseases, sicknesses and even unnatural deaths! And the effects can go much further than just health, they can be the cause of failures, disasters, poverty! And in some cases, the cause of interference in prayer, hearing God’s voice, and even understanding God’s word.

Thankfully, God gave us the only remedy for a curse from sin, which means that there is no longer any reason for any person to remain under any curse. The remedy is at hand, but the Redemption MUST Be applied in order for us to be transformed and receive the full provision provided by the work on the cross.

The lady in this video was a Christian from Indonesia, and from several generations of Christians, but during prayer the Holy Spirit revealed that she had a spirit of idolatry. A generational curse from her forefathers’ sin in worshiping an old Indian idol that had spread across south east Asia.

She couldn’t possibly have known the sins or consequences of her forefathers but by the revelation by the Holy Spirit, as Paul said, “For I know of nothing against myself, yet I am not justified by this; but He who judges me is the Lord”, and further goes on to tell us that He will “bring to light the hidden things of darkness” (1Cor.4:4-6).

”For the word of God is living and powerful, and sharper than any two-edged sword, piercing even to the division of soul and spirit, and of joints and marrow, and is a discerner of the thoughts and intents of the heart. And there is no creature hidden from His sight” (Heb.4:12-14)

Which is why Peter tells us (1Pet.1:22) that by obeying the truth through the Spirit we can sanctify our souls, and again in 1Pet.3:15 to “sanctify the Lord God in your hearts”. As this lady did, when she came forward by faith to receive prayer, she allowed the Lord to reveal the hidden bondages, that through repentance and the prepaid provision in Christ, was able to be truly set free.
​”For nothing is secret that will not be revealed,
​ nor anything hidden that will not be known and come to light” (Luk.8:17 & Mark.4:22).

Although this lady had received much prayer before, much of her deliverance in this ministry session, was accomplished through breaking freemasonry curses, and casting out the unclean spirits that were related to it. Below she testifies to the healings that she received through the deliverance, praise God.

Whilst ministering at Lloyds & Chapmans home fellowship meetings in Worcester this weekend, this lady (in the video) testifies to her sciatic nerves being healed through deliverance, incredible. And although this lady had received much prayer before, much of her deliverance in this ministry session, was accomplished through breaking freemasonry curses, and casting out the unclean spirits that were related to it. Here, she testifies to the healings that she received through the deliverance, praise God.

Just before we prayed for this gentleman, we had prayed for his female relative. They had all come together driving over 10 hours in a bus for this meeting. When we prayed for the relative, nothing happened. Another relative then revealed that she did not believe in Jesus. We explained to her that while God is sovereign and can heal anyone, from our experience, one usually has to believe in Jesus to be the healer in order for healing to take place. Even though she understood us, she declined to accept Jesus as her Saviour and remained in ill health.

We then moved on to this man who came with knee pains. The Holy Spirit revealed he had a poverty curse which was causing the knee pains. And the very moment we broke the curse in the name of Jesus, he was healed! Glory to God!

Such a witness to the grace, mercy and healing power of Christ to those who were not of the faith as God healed everyone who believed on Him.

KNEES HEALED BY FAITH IN JESUS

This man wan so determined to come to receive healing from Jesus. That he came with a bus load of his friends and family and drove ten hours from the neighbouring country so that he could get here! And during the meeting at Open Space, Singapore, God healed him after prayer, praise God.

Posted by Kevin Dexter Ministry on Wednesday, May 13, 2020 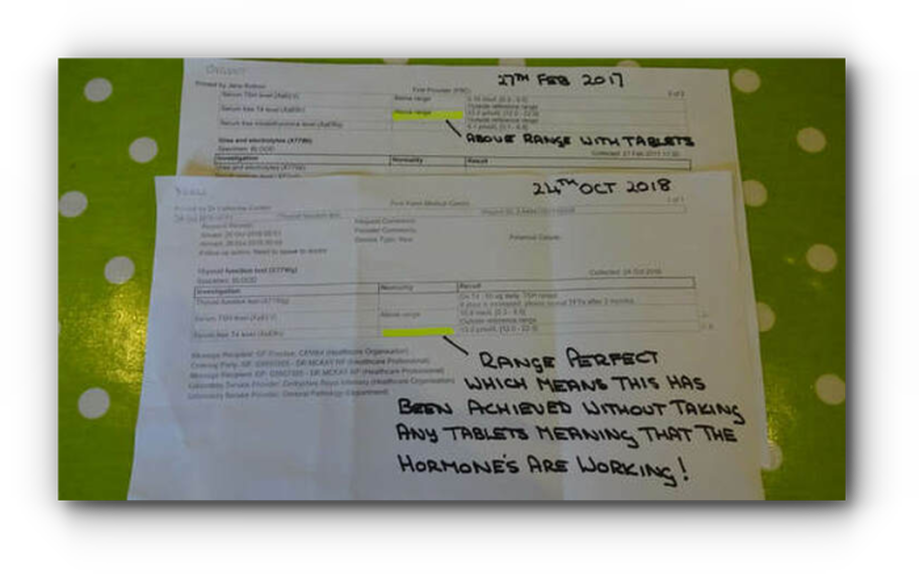 God miraculously heals hands as curses were broken to idols

A Christian sister brought this lady to the meeting at FGB SS2. She was seeking healing for her hands. They were swollen and they couldn't close. When she came to the altar for prayer, she asked for healing but she was an idol worshipper of the Chinese Diety Goddess of Mercy, Kun Yum. She gave her life to Jesus and repented. Kevin prayed for her hands and she was healed and her fingers could make a fist. Spirits of holding joss sticks and praying to Idols came out and a curse was broken over her hands and fingers. Praise God... Miraculous salvation! 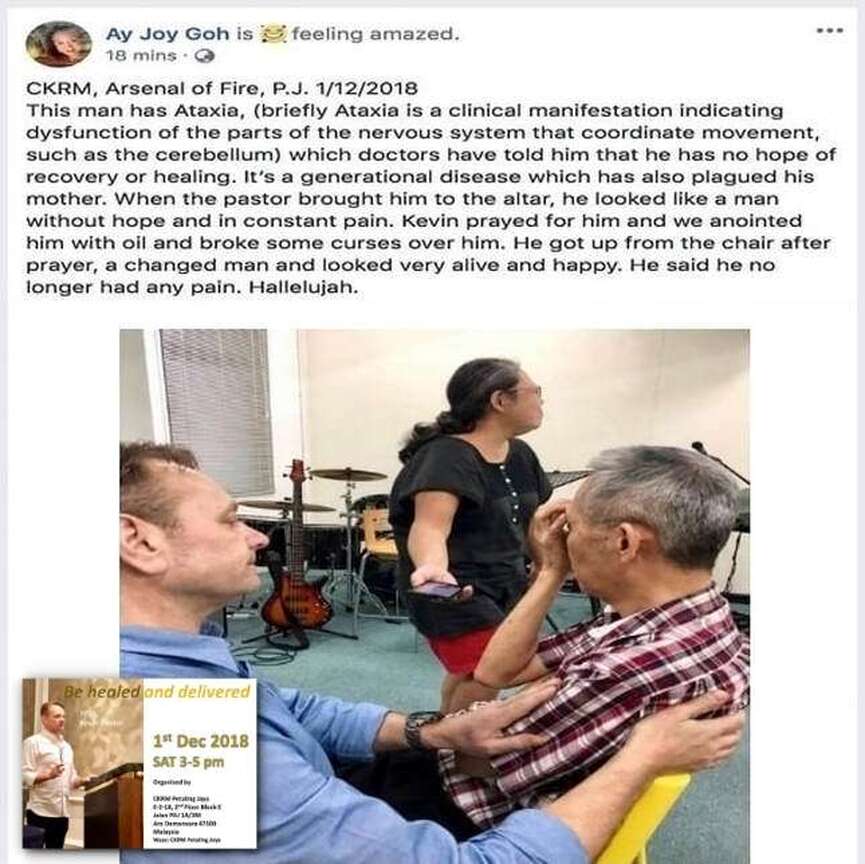 Testimony from a young lady, who shares how she felt here illness leave her body in the form of a spirit as I broke off generational curses through prayer in the name of Jesus, praise God.

Testimony from a young lady that I prayed for at the Glory Well in Arundel, Queensland, Australia.

Posted by Kevin Dexter Ministry on Wednesday, May 13, 2020

Once I was asked to pray for a lady with an issue of fear. As we prayed for her, I was shown that there was an issue with sexual abuse from her childhood. The Holy Spirit guided me in sharing different testimonies of a similar nature. After about an hour of sharing, all of a sudden she started to cry. The ministry time was so important, because the stories led by the Spirit had opened up her heart and mind to receive the Spirit’s conviction. And as she opened up, I heard the most disturbing story of how her parents had in fact dedicated her to Satan as a baby and had involved her in satanic rituals. The knock-on effect of sexual abuse and fear of the opposite sex had destroyed her relationships and life. Now, lots of people had prayed for this fear problem to go, but I was shown by the Spirit that, in order for her to be delivered, we must first break off the generational curse placed upon her through her parents. And as we asked her to acknowledge and repent of the sins of her parents, then forgive her parents, this tore out the root that was enabling the spirit of fear a foothold. So eventually we cast it out and she was completely healed of her fear of men, praise God - Kevin Dexter.

Great testimony and witness to a gambling spirit.

GREAT TESTIMONY AND WITNESS TO A GAMBLING SPIRIT

ADMIN REPORT - Kevin Dexter's Meetings in Malaysia.- 2018 This Chinese lady came up for prayers for her stomach pains. So we prayed for the stomach pains to be healed and we discerned that there is a gambling spirit in there messing around in her stomach. She complained she did not gamble. So we broke the generational curse of mahjong gambling anyway. Lo and behold,The demon spirit started manifesting the actions of playing the tiled-based Chinese mahjong. It was a bit humorous. Another victim of a Chinese generational bondage set free! Hallelujah.