"So that even handkerchiefs or aprons were brought from his body to the sick, and the diseases left them and the evil spirits went out of them". Acts 19:12

TESTIMONY OF A BABY HEALED THROUGH ANOINTED PRAYER SHAWL

10 months ago, Isaac's father came to ask for prayers for his son. He told us his child was sick, but we were not told what his son’s illness was or how serious it was. At that time, Isaac was in hospital with fever and was having difficulties in breathing because of complications from operations he had gone through. You see, Isaac was born with Stage 4 Intraventricular haemorrhage (IVH). This is a condition of bleeding in the brain that can be fatal or cause serious disabilities and at stage 4, the odds of survival are much lower. The IVH also caused hydrocephalus for Isaac, which is an accumulation of fluid in the brain. To treat this, a shunt had to be inserted into Isaac's brain to drain the fluid.

By this time, Isaac's father came to ask for prayers, Isaac had already spent 2 months in the intensive care unit and had gone through 8 operations due to complications with the shunt. All this before he was 7 months old! That day, we prayed over Isaac's grandmother’s shawl for his father to take it back to him (Acts 19:11-12). We had no knowledge of what happened to Isaac thereafter. Then in one of our meetings in February 2020, we recognised Isaac's father when he came forward for prayers and found out with great joy that Isaac was healed from his sickness and is doing well. 10 months ago, that night, the shawl was place on Isaac. In the morning the fever left, his breathing improved, and he was discharged a few days later! All Glory to God!

Isaac's father has this to add; "Isaac's testimony is truly a miracle of God because with IVH 4, the doctors gave a lot of negative reports. But God heard our prayers and every single detailed check (and tests) by doctors has revealed that he is perfectly normal. Even the doctors, some who are Muslims and non-believers admitted that this is a miracle and said "to continue to pray to the God that we are praying to".  His father also shared with us a video of Isaac being a happy, healthy baby today. It is truly encouraging for us to receive testimony that witnesses to miracle of prayer cloths in the word of God. Hallelujah!
​Acts.19:11-12, “Now God worked unusual miracles by the hands of Paul, so that even handkerchiefs or aprons were brought from his body to the sick, and the diseases left them and the evil spirits went out of them”.
- ​At Cornerstone Glory International, PJ, Malaysia.

In a meeting with the FGB Chapter in Damansara Utama, this man came forward for prayer, he’d had severe pains in his head, ever since he’d had brain surgery, doctors said there was nothing that they could do, but as he received prayer during the alter call, God completely healed him, Praise God. 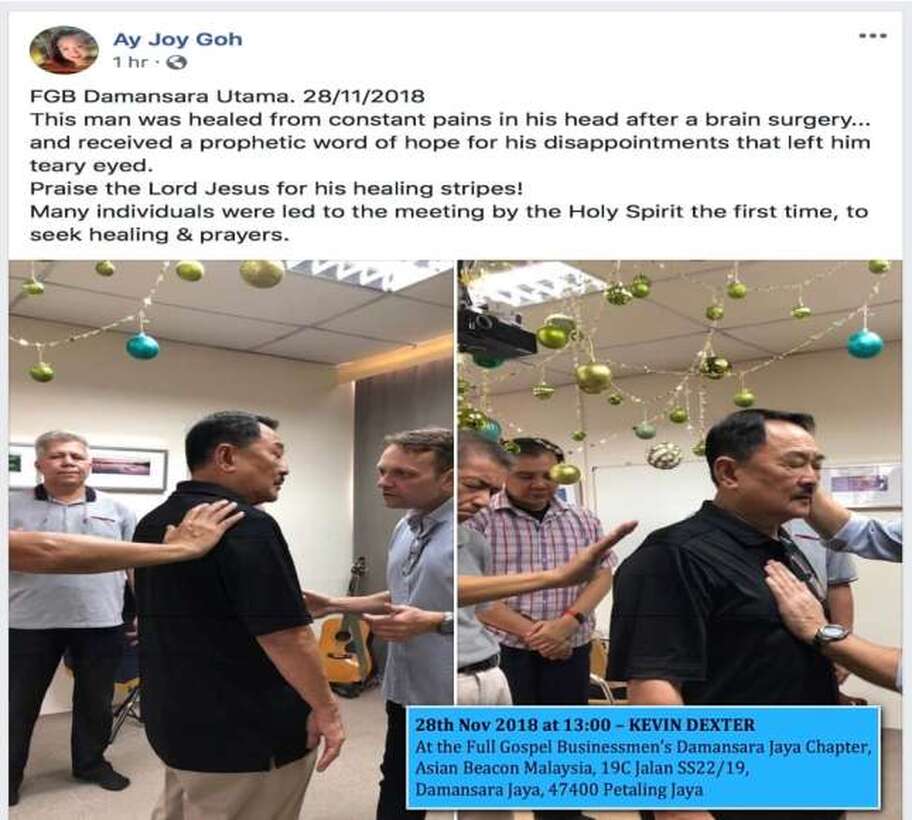 GOD REMOVES A CYST ON HER BRAIN

This young lady had a cyst on the brain, that was causing her much pain and causing her to miss much of her schooling. God removed it tonight, how awesome, praise God.​

Whilst ministering at a prophetic bible college in Scotland, I felt an angel touching my left ankle and I just knew that there was someone in the room with pain in their left ankle, I looked around the room, thinking that the Holy Spirit would lead me to the person, I actually felt this pain for about 10 minutes while pondering who it was, when suddenly the door opened and a guy i'd never met before, turned up late to the meeting, hobbling into the room wearing a metal brace from his foot to his knee on his left leg! And as the meeting finished, this guy came straight over to me and asked for prayer. The guy had in fact got a brain tumour which was stopping him using his ankle, so I asked a lady to pray with me and as we prayed, the guy said that he could feel the tumour shrinking inside his head! Amen, and the lady received a picture from the Lord to confirm, so then we prayed over his ankle and eventually he took of his metal splint and began to walk around the room! He actually walked out of the meeting carrying his splint over his shoulder lol.. Our God is amazing! - Kevin Dexter

Through prayer, God healed this man of memory loss, that he'd sustained in a car accident, he was brought to me during a gospel outreach in Kovilpatti, India, praise God.
Conference highlights featured below

DELIVERED FROM A SPIRIT OF GRIEF AND HEALED OF MEMORY LOSS

My friend asked me to come and visit him a while back; he’d just come out of hospital with pneumonia and was recovering at home. While chatting, he mentioned it had been extremely difficult because of his asthma and was causing him difficulty to breath.  I was unaware of this and, me being me, I just so wanted to see God set him free from this sickness. And so, as I prayed for him, the Holy Spirit revealed to me that something terrible had happened to him as a child, and this had allowed a spirit of grief to enter him. By faith, I mentioned this to him and he replied that, when he was eight years old, his father passed away and it wasn’t long after that he developed asthma. His grief was so bad that his mind had blanked out all his previous memories before this incident, and had left him with no recollection of his father at all.

So I placed my hand upon his chest and started to command the spirit of grief to come out of him and, while praying, the Holy Spirit gave me some more names – depression and fear – and, as I declared these to come out of him, he stated that there was something stirring in his stomach! The ‘something’ being all these unclean spirits! Well, as me and his wife kept praying, this ‘something’ (the unclean spirits) moved up his body to about the heart, and then his wife said that the Holy Spirit was revealing to her that he had a freemasonry curse that needed to be broken from him. So we started breaking curses as led by the Holy Spirit, which actually led to us having to break off a generational Scottish clan covenant too (another story), but after we had done all of this, the ‘something’ then moved up, into his neck! See how the Holy Spirit was guiding us to break the demonic strongholds, which were trying to stop him from becoming free.

At this point, the Holy Spirit revealed to me that the guy was, in fact, the only son that hadn’t been allowed to his father’s funeral, having been considered too young at the time to attend, and this had stifled him so much that it had led to him holding ill feeling towards his brothers. And the moment he repented and forgave his brothers, the ‘something’ (unclean spirits) came into his mouth and he coughed them out! And began to inhale deeply, Amen. I then placed my hands upon his head and started praying for a renewing of his mind and memories. Just then, the Holy Spirit showed me a vision of a young boy waiting in a room and then his father entered and knelt down beside him and started hugging his son tightly. Suddenly, as I was watching the vision, the man just burst into uncontrollable crying, his tears running over my hands, which were now on his chest holding him up. He shouted out, “I can see my father! I can see my father!!!! My memories are coming back!!!!” I looked over at his wife, whose eyes were now also watering up too with a smile ear to ear – such a powerful and emotional encounter, where God restored that which had been stolen.

You can see how from a very early age, things had entered his life, bringing sickness and distorting how he saw his father and heavenly Father. We are in a battle to set captives free and take back that which has been stolen. All authority has been given to us; we just need to step out in faith to use it. I hope this has inspired people to take up ‘sword practice’, to use their gifts to build up bodies and souls of the church - Kevin Dexter.

TORMENTS OF THE MIND & BROKEN HEARTS HEALED THROUGH DELIVERANCE

Some video footage taken from the meetings in Malaysia 2018 of broken hearts and torments of the mind being healed through deliverance, praise God.